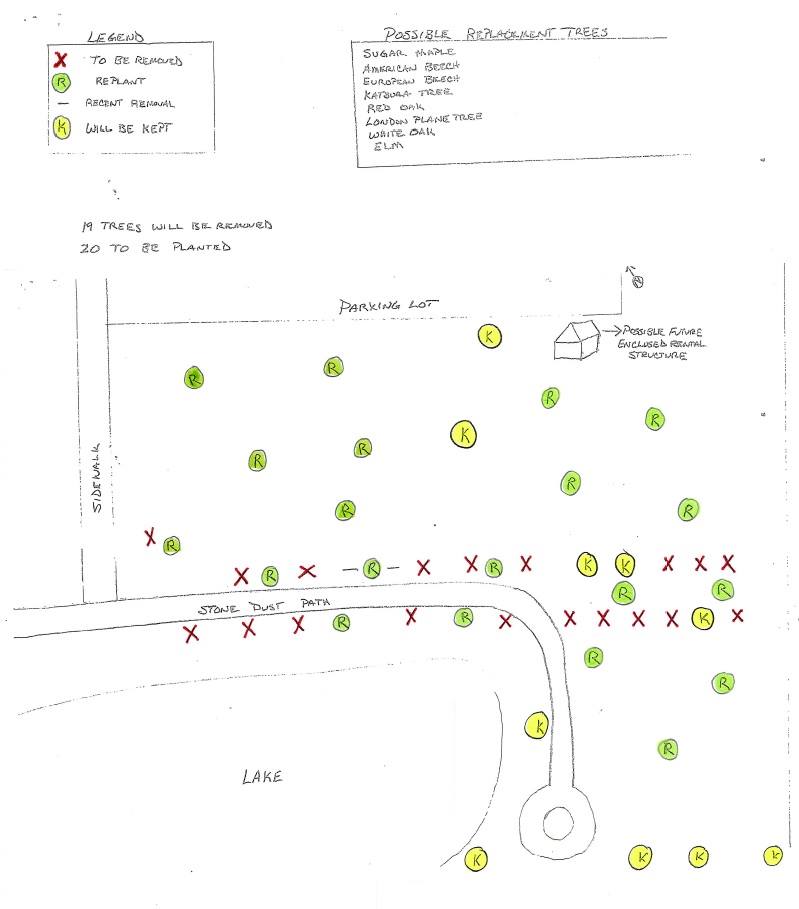 The September Tree Advisory Board meeting was held at Lakefront Park (to the east of Kershaw Park) on Wednesday, September 16th to access the willow trees and plans for majestic replacement trees.

Unfortunately, the willow trees in Lakefront Park (also commonly referred to as Kershaw Park East) have become a danger to the public and are in poor health. Large limbs are falling at an alarming rate which could damage park benches and/or cause injury to the public. The City Arborist has inspected each tree and has recommended the removal of the majority of willow trees along the path. City crews will be removing the willow trees in October. The removal of the willow trees will change the character of the park, but also provides an opportunity to redefine the park with new plantings. To the left is a draft planting plan for the area. Once planted, there will be more trees than there are currently.

**Important to note: The aging willow trees were inherited by the City of Canandaigua in the late 90's. Heavy pruning was done but not enough to make up for the years of non-maintenance prior to that. Large limbs came down in storms until this year when large limbs began falling in calm weather. The DPW would have removed the trees early this past summer if not for wanting to make sure the community was aware of the need for their removal.

Thoughts From a Member of Your Tab

I was contacted online by another city resident and would like to share our conversation here with hopes that others might have a better understanding regarding the Lakefront Park. Our next meeting will be at Wood Library (third floor) at 6:30 pm on Wednesday, October 7, 2015. We also have an email account if you are unable to attend the meetings. - Laura

Question: Are you aware of the city plans to cut down all of the willows along the lake at Kershaw? Do you know an arborist or tree expert who could give is a second opinion?

Laura's Reply: I am aware of the need to remove 2 / 3 (19 of the 29) trees. The arborist and many city workers and elected officials have been watching the Lakefront Park area as more large limbs and complete trees have fallen these past years (most recently without the help of wind). The willows are 100 to 150 years old and like all living things they are at the end of their life. Because they are in a heavily populated area the increased risk of harm to humans or animals is more likely. I have seen photos of the trees and limbs that have fallen in the past year and realize that the weight alone could have killed someone. More people have died in 2015 by fallen trees than by lightning bolts. Falling tree deaths can be prevented. The Tree Advisory Board (with members from FLCC) supports the greater Lakefront Park area be replanted with a mix of majestic trees. Second and third expert opinions are certainly welcome. As professionals they would need to look at the whole picture and realize the increasing number of falling limbs and trees. They should also consider the liabilities that the city would face should a limb fall and kill or maim someone. A knowledgeable friend of mine recommends severe trimming/pruning (2 / 3 out of each tree) of willows as he has done on numerous occasions but even he admits the tree's youth needs to be factored in for severe pruning to be successful. To do nothing will bring a natural change to the area - but one also resulting in the great loss of trees. I know this may not be the answer you are looking for...but honestly the members of the TAB also wish we had magic wands to bring life and vitality to these and all trees.

Question: Thank you! When is this scheduled for? Early or late October?

Laura's Reply: It may depend on what else occurs regarding the work load of DPW and Parks Departments since the trees will be taken down "in house" (much less expensive). For example, some DPW jobs got delayed when they had to remove fallen limbs and trees at the Lakeshore Park on several occasions earlier this year. I believe Lakeshore Park and the willow trees will be brought up at the City Council meeting this Thursday, October 1st at 7 pm in the City Hall court room. As you know, these meetings are open to the public. I know the city has waited this long to actually do something proactive since they did want public awareness and involvement. We also discussed an opportunity for folks to sponsor new majestic tree plantings - so perhaps more mature trees could be planted (larger tree plants cost more than younger saplings).